Run it in the background while you play games, and check the frame rate, make gameplay videos and take screenshots with ease. Advertisement To use FRAPS, simply start the app before your game, and when the game starts, you will se a frame rate counter in the corner of the screen, great for benchmarking. Taking screenshots and video is hotkey activated. You can choose to take screenshots one at a time, or repeatedly with a given time gap. For video, you can record with sound, and even with a microphone, so you can create your own walk throughs easily. 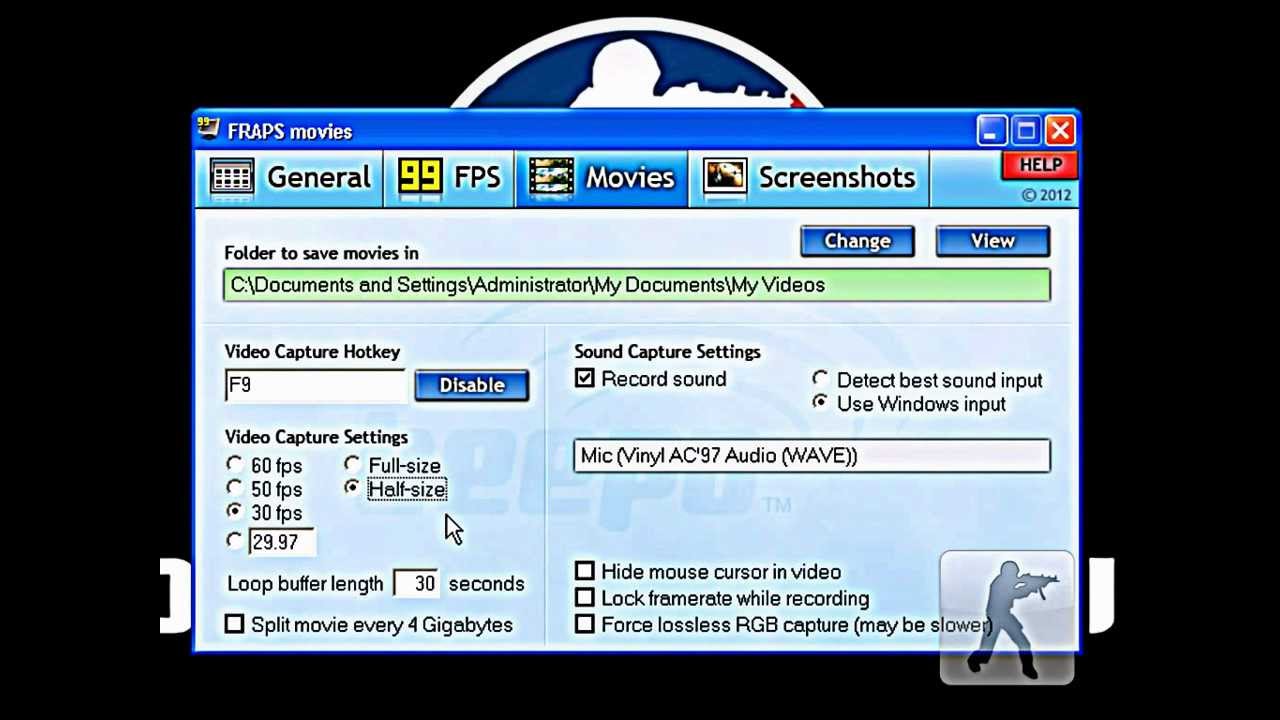 Free Download The most outstanding feature with Fraps is the ability to indicate the frame rate on the screen in real time during game-play. You get detailed information regarding the frame rate using the fully packed FPS statistics option and in addition an option to stop benchmarking automatically after a period of your choice.

To use the FPS feature, an overlay is provided to allow you to display the current FPS value real-time on any corner of your choice and also opt whether to update the value once every second or continuously.

Both the benchmarking and overlay features are backed up by customizable hotkeys for fast implementation. When it comes to the actual screen recording, Fraps provides several options with the first being a customizable saving directory for your recorded videos. You can at any time change the directory to where you have enough storage space. A customizable hotkey is available for you to use when you need to start recording once the game is up and running.

Regarding the frame rate, Fraps lets you choose from 60, 50, 30 and even a custom frame rate of your preference. Better yet, you will be able to lock the framerate to a constant value at the click of a button. Half-size — This means that Fraps will output the recording at half the resolution of the game screen. Sound capture is also not left out in Fraps. This system sound is mostly the sound coming from the game being played although you are not limited in case you need to include sound from external input like the microphone.

You just need to select the external input device to use and you will be ready to record once you have enabled the option. An interesting feature is that you will be able to set a custom key such that external input in only recorded when the set key is pressed. Fraps is able to capture system sound in either stereo or even multichannel format. If need be, you are also free to show or hide the mouse cursor on the video. Since Fraps saves the recording in AVI format, the output size can be very huge meaning you need to have enough storage space depending on how long you intend the recording to be.

Else, you can use a video converter that will compress the video to a considerable and shareable size. On top of that, Fraps let you split the recording after every 4 Gigabytes instead of having one single huge file. Fraps is not left behind when it comes to dealing with screenshots. Some other similar software will miss this feature but Fraps even gives you extra control to what you will be able to achieve with snapshots.

You are provided with a customizable saving directory and a hotkey for instant capturing. We have talked about fps overlay previously and in the snapshots also you can decide whether to include the frame rate at the time of taking the screenshot.

If you want to take continuous screenshots, you can just set an interval after which you just need to press the hotkey to stop the process. However, it is good to note that with the free version you will be able to only save the snapshots in BMP format. Free Fraps version comes will enable you to make a recording by the limitations are too much. Why do I say this? First of all is the fact that you can not make a recording of more than 30 seconds. These second videos are watermarked by the manufacturer and you can not use the loop recording feature.

When recording the screen, the full-size recording is not available in the free version. Once you cough a sum of 33 euros you get to join the members club where you enjoy all the features including free updates.

The final decision on the Fraps version to use ultimately falls on you as the user. Based on what you want to achieve, the version to go for will be crystal clear. This is no ordinary screen recorder as it will not record the normal usage but only games.

That means, unless you are a gamer, you have to look for an alternative screen recorder for other kinds of recordings. Similar Software.

Free Download The most outstanding feature with Fraps is the ability to indicate the frame rate on the screen in real time during game-play. You get detailed information regarding the frame rate using the fully packed FPS statistics option and in addition an option to stop benchmarking automatically after a period of your choice. To use the FPS feature, an overlay is provided to allow you to display the current FPS value real-time on any corner of your choice and also opt whether to update the value once every second or continuously.

It captures onscreen video and audio, adds timestamps and counters, and benchmarks frames per second, frame times, and minimum-maximum average. Pros Screen Capture settings: We could add frame rate overlays to screenshots and set Fraps to capture screenshots at specific intervals until the Screen Capture hotkey is pressed, making Fraps a serviceable security or monitoring app.

Fraps screen recorder is a screencasting tool from Beepa company. Fraps is not like other screen recording apps as it is best suited for game-play recording. Download Fraps Save videos of your gameplays. Fraps is an excellent tool developed for players who like to save their gameplays and take snapshots of. Download Fraps. Fraps is a universal Windows application that can be used with all games using DirectX or OpenGL technology.